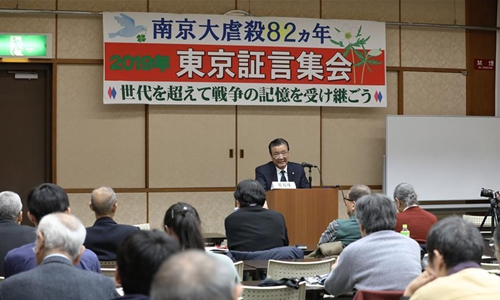 At the invitation of a few local civil groups, Ge Fengjin shared his father’s story at the meeting to mark the 82nd anniversary of the Nanjing Massacre. About 100 people attended the meeting.

Ge Daorong, a survivor of the massacre, was only 10 years old when Nanjing fell to Japanese invaders. He survived by escaping into the Safety Zone during the mass killing, but his three uncles did not.

Since the 1980s, he has devoted himself to sharing his story. As he gets older, his son has taken over.

“On Dec. 13, 1937, the Japanese invaders occupied Nanjing and carried out the deadly Nanjing massacre, killing 300,000 of our compatriots, including my family members,” said Ge Fengjin.

As descendant of a survivor of the Nanjing Massacre, he said he should not only remember the painful history, but also has the responsibility to tell the truth and testify to the the mass-killing, adding that he wants more young people to know and remember this part of history.

Sun Zhaiwei, an expert on the Nanjing Massacre and researcher at Jiangsu Provincial Academy of Social Sciences, delivered a speech themed “The solemn truth of Nanjing Defense Battle” at the meeting.

Reviewing the truth of the battle is not to continue the hatred, Sun said, but to learn from the historical experience, be vigilant to the resurgence of Japanese militarism which has brought disasters to mankind, and work together to strive for and maintain lasting world peace.

Shota Naito, a postdoctoral fellow majored in history from Japan’s Meiji University, told Xinhua that he has been attending the testimony meeting of the Nanjing Massacre in Tokyo every year since 2015.

Each year, the organizers invite various people to talk about the massacre in different places and perspectives, which offers a rare opportunity to learn about the truth of history in Japan, he said, adding that he is concerned that some people in Japan do not know the truth of history, and some even attempt to falsify history, forget history and deny the existence of the Nanjing Massacre.

“Every time I listen to the stories with tears in my eyes, I feel sorry (for the Chinese people),” he said.

The Nanjing Massacre took place after the Japanese troops captured the city on Dec. 13, 1937. Over six weeks, they killed about 300,000 Chinese civilians and unarmed soldiers in one of the most barbaric episodes of World War II.