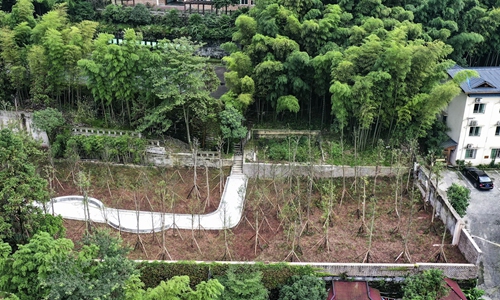 A site which used to be illegal buildings is now recovered with green. Photo: Courtesy of Chongqing forestry administration

Since 2016, the inspection and its “looking back” review mechanism have taken place across the country, diagnosing environmental problems. The campaign uncovers some drawbacks of the effect local governments have on natural ecosystems.

In addition to the management of Jinyun Mountain National Natural Reserve, other cases also saw the effect of the central inspection on improving ecology and environment.

Lianjiang River, the mother river of the Chaoshan region in South China’s Guangdong Province, had suffered from severe pollution for two decades. Its water was “black, stinky and full of trashes,” news site thepaper.cn reported.

In the past three years, after several rounds of central inspection to the Lianjiang River and inspectors twice criticizing pollution management, the river finally saw improvements and severe pollution is a thing of the past. For the first time in 20 years, the water in the Lianjiang River reached Level V.

During the second round of the first central inspection on ecology and environment, about 18,900 cases had been reported by late October, according to the statement the Ministry of Ecology and Environment sent to the Global Times in November.

The ministry has also continued the “beat the air pollution” campaign, reinforcing its supervision and support in key areas. In October, the inspection has checked 16,100 places, according to the statement.

China launched a series of central environmental inspections in 2016 after decades of growth left the country saddled with problems such as smog and contaminated soil, the Xinhua News Agency reported.

In July, the country started a new round of central environmental inspections in six provincial-level regions and two centrally administered state-owned enterprises.