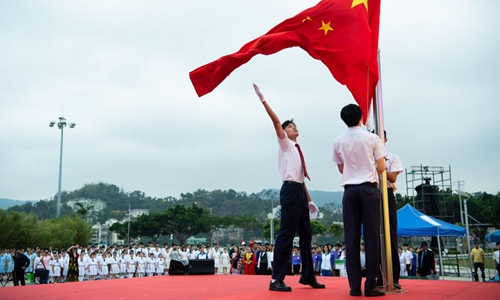 Every Monday morning, Macao’s Hou Kong Middle School holds a national flag-raising ceremony attended by all the teachers and the students.

The ceremony dates back to Oct. 1, 1949, when the school’s principal Du Nam raised the five-star red flag on the campus. The flag-raising ceremony has been held until today, which has become the common memory of all the teachers and students in Hou Kong Middle School.

Nowadays, the majority of primary and middle schools in Macao hold national flag-raising ceremonies every Monday morning. All schools, colleges and universities in Macao fly the national flags on important festivals.

National flag, national anthem and national emblem as a representative and symbol of the motherland are well known in Macao’s schools.

Macao has set up a series of laws and regulations to carry out education of national flag, national anthem and national emblem for students in schools.

According to the framework of curriculum for Macao’s schools by the government of the Macao Special Administrative Region (SAR), all of Macao students are required to know the national flag and national emblem, understand their basic meaning and sing the national anthem when at their primary schools. 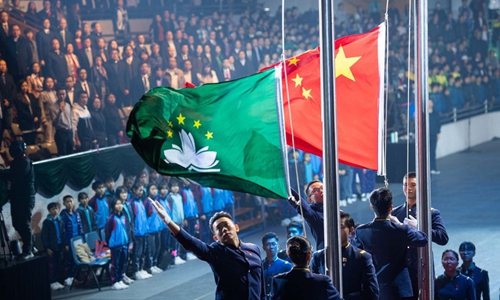 Students are raising China’s national flag and the flag of the Macao Special Administrative Region (SAR) in an activity to celebrate the 20th anniversary of Macao’s return to the motherland in Macao, south China, Dec. 6, 2019. (Xinhua/Zhang Jinjia)

To implement those regulations, Macao’s education authorities have worked with institutions from the mainland to publish textbooks for Macao students.

For example, Virtue and Citizen, published by Education and Youth Affairs Bureau of Macao and People’s Education Press, a famous Chinese publisher, has been used for years in Macao’s primary and middle schools and accepted gradually by more and more students.

In addition, Macao’s junior and senior middle schools have set Chinese history as a course in class and use textbooks published by People’s Education Press.

In recent years, the education sector in Macao has also encouraged the students to read books about China, providing extracurricular reading books for primary and middle schools students, as well as some kindergartens.

Those extracurricular books were jointly published by well-known publishing houses from the mainland and Macao’s institutions, or provided through exchanges and cooperation with the mainland.

In 2018, China’s
Ministry of Education also gave such books to 77 schools in Macao as presents, 20 sets for each, including the books on Chinese history, the world history, and the Chinese culture such as ancient Chinese poetry and Chinese characters.

Macao’s education sector has always attached great importance to the promotion of traditional Chinese culture, and encourage the students to learn about the Chinese history and cultural traditions to have a broad perspective on their own country. 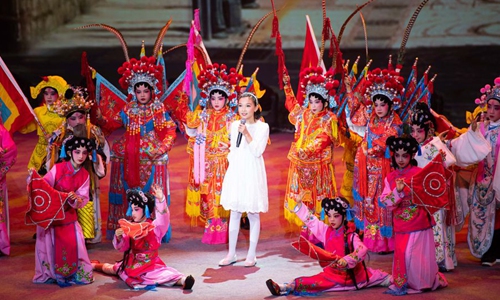 Students perform in an activity to celebrate the 20th anniversary of Macao’s return to the motherland in Macao, south China, Dec. 6, 2019. (Xinhua/Zhang Jinjia)

Macao’s Kao Yip Middle School has set up compulsory calligraphy courses in its primary and middle sectors, which has become one of its characteristics. Students often win prizes in calligraphy competitions at various levels.

He Cheng, the principal of Kao Yip Middle School, said that the school has been providing calligraphy education for a long time, and has carried out a wide range of extracurricular calligraphy activities, to guide students to understand the Chinese cultural tradition, feel the charm of the Chinese language, and promote their interests in and understanding about their country.

In addition, the Macao SAR government and social organizations also support and encourage students to visit the mainland, learn about its social conditions, and experience Chinese history and culture by themselves.

Education and Youth Affairs Bureau of Macao and relevant ministries and institutions of central government have held many summer camps and travel programs for Macao students to know more about their country by paying visits to universities, museums and historical sites in the mainland.

The bureau also plans to increase funding for the “Know the Motherland Study Tour” to include teaching staff to study the Chinese history and culture, so that teachers and students together can learn about China’s modern history and development.

At the beginning of 2016, the SAR government launched the One Thousand Talents program which targets middle schools, college and university students and young employees in Macao.

Each year, the program selects 1,000 youth to go to different provinces and cities in the mainland to carry out various learning and exchange activities. The theme of the activity covers fields such as history and culture, sports, scientific and technological innovation, youth entrepreneurship, as well as social work.